In many cases, a person starts out with the intention of improving his or her health by eating healthier foods. Over time, this intention turns into a compulsion, at which point the initial reason for eating healthy gets lost in the obsession.

Orthorexics abide by a rigid eating style that emphasizes natural, no fat, no sugar foods as well as other wholesome or “pure” menu plans.

Someone battling orthorexia nervosa symptoms has attached his or her sense of worth and self-esteem to the practice of eating healthy foods.

While there’s nothing inherently wrong with deriving a sense of esteem from living a healthy lifestyle, people with orthorexia will actually experience feelings of guilt and self-loathing when they slip-up and eat something they consider unhealthy. 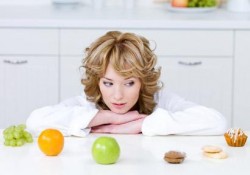 Orthorexia develops from an obsession with eating healthy.

As a person becomes more involved with eating healthy, he or she becomes increasingly preoccupied with –

Not surprisingly, this level of dedication takes energy, focus and time. As a result, a person starts to spend less and less time with others. Being restricted to healthy foods only also prevents a person from dining out or eating at a friend’s house.

Ironically, a person’s initial intention to eat better and improve his or health can reach a point where serious health issues start to develop. In effect, the practice of eating healthy becomes more important than any negative consequences that result.

An initial desire to achieve better health through healthy eating practices hinges on a belief that certain foods can make a person sick or unhealthy. Over time, the obsession behind orthorexia nervosa symptoms develops into an overall fear of food. As symptoms worsen, orthorexics eliminate more and more food types from their diet for fear of becoming sick.