Most of the time, symptoms of seasonal depression or SAD appear in the late fall and continue throughout the winter months.  The symptoms of winter depression include: 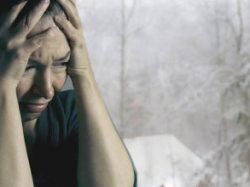 Seasonal depression symptoms can be overwhelming for many people.

Although a less common type of seasonal depression, summer depression does occur and can lead to a slightly different subset of symptoms than winter depression.  SAD that appears during the summer months may include any of the following symptoms:

When is depression just a one-off feeling and when is it a real problem?  If you feel down and out, or you have signs of seasonal depression that seem to stick around for more than a couple of days, you may be suffering from a serious condition that requires professional treatment.  Consider consulting with a doctor, psychotherapist or treatment professional if seasonal depression has you feeling down for days on end, missing activities that you normally enjoy, or feeling particularly off.  Seasonal depression symptoms can continue for weeks or even months at a time and, if left untreated, could cause you to have suicidal thoughts or actions that pose serious threats to your well-being.  Contact a professional for help if you feel hopeless, alone or otherwise depressed no matter what time of the year it is.