According to Pepperdine Libraries News, anywhere from 16 to 54 percent of all people affected by depression also experience psychotic symptoms. Psychotic depression – a subtype of major depression disorder – is typically wrought with dangerous, distressing symptoms that can place a person’s life at risk.

Symptoms of psychotic depression can be so debilitating as to make normal life activities, such as work, relationship interactions and self-care, difficult, if not impossible. Due to the severe nature of the symptoms, certain risk factors place those affected by psychotic depression at considerable risk when left untreated.

Psychotic depression encompasses all of the symptoms associated with major depression along with some form of psychosis. Psychosis, in and of itself, entails a noticeable break with reality in terms of perception and behavior. Reality breaks typically manifest as hallucinations and/or delusions.

Hallucinations can take an auditory form, such as hearing voices or a visual form as in seeing things or people that aren’t really there. Delusions involve an actual belief system that fuels a person’s emotions, such as having intense feelings of guilt and sin, failure or worthlessness. The “out-of-touch” with reality aspect is a primary indicator of psychotic depression. In terms of hospital admissions, this condition affects an estimated one out of every four people admitted. 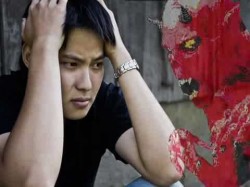 The dangers of psychotic depression disorder are very real. Get the help you need!

As delusions and hallucinations are characteristic of psychotic conditions (like schizophrenia), the actual content of these symptoms becomes the determining factor with psychotic depression, according to the University of Maryland Medical Center. Whereas some people suffering from schizophrenia may believe someone is following them or trying to control their thoughts, symptoms associated with psychotic depression maintain a certain theme that’s related to the person’s depression symptoms. For example, people experiencing intense feelings of worthlessness will hear voices that talk about how worthless they are. For many people, these symptoms become a form of self-torment that fuels the emotions behind the disorder.

Depending on the severity of the condition, psychotic symptoms can reach a point where self-identity issues come into play. People who feel extremely guilty over things beyond their control may start to believe they have certain characteristics when in actuality they don’t. For example, someone who’s hallucinations center on images of the devil may start to see him or herself as an evil, demonic-like person.

Psychotic depression symptoms can reach a point where a person feels driven to attempt suicide or harm someone else. He or she may become angry for seemingly no reason on a frequent basis. Isolation and irregular sleep patterns are also characteristic of this disorder.

People experiencing severe depression symptoms have the most difficulty functioning in everyday life. Many also suffer from other psychological and/or medical disorders on top of a psychotic depression condition, according to Virginia Commonwealth University. The risk for suicide is also a concern with 80 percent of suffers reporting having suicidal ideations.