The range of changes that takes place during the postpartum adjustment period can strain the healthiest and most mentally stable of mothers. Biological changes appear as shifts in hormonal levels not to mention the added weight many women put on when pregnant. For new mothers, emotional stress from the pain of delivery is quickly followed by the new role of mother and the tasks involved with caring for a newborn. Until newborns learn to sleep through the night, mothers – both experienced and new – must contend with sleep deprivation on top of it all.

According to the National Institute of Mental Health, postpartum depression affects an estimated 7 to 13 percent of American women, though these numbers are most likely an underestimate of the actual occurrence rate. Considering the huge responsibility involved with caring for a newborn, the sooner postpartum depression symptoms are spotted the better off the mother and the baby will be.

With hormonal fluctuations and daily stressors affecting different people in different ways, postpartum depression symptoms can appear anytime within the first year after giving birth. This means a woman may start to show symptoms immediately after childbirth or months after childbirth. Once postpartum depression symptoms start, they tend to get worse with time.

The most common symptoms associated with postpartum depression disorder include: 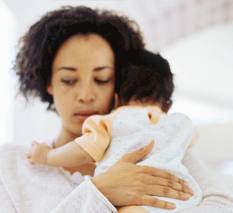 Knowing the symptoms of postpartum depression can help you detect it early, and help both the mother and baby.

Forming a healthy and secure attachment with a newborn becomes one of the most fundamental tasks a mother has throughout the infancy period. A secure attachment depends on how a mother responds to a newborn, whether he or she is crying, laughing or smiling. Without this attachment, newborns grow into children at risk of developing emotional, behavioral and social problems.

Postpartum depression impairs a mother’s ability to form this essential bond with her newborn. A woman suffering from postpartum depression is less likely to breastfeed her newborn. She won’t play with or read to her newborn. Overall, any type of care a mother provides is inconsistent and often half-hearted. Sometimes she’ll be loving and attentive towards the newborn and sometimes she won’t. On some occasions she may even react negatively or not respond at all.

Both the mother and the baby suffer when postpartum depression develops. For these reasons, it’s important that mothers who suspect they have this condition get help as soon as possible.