Does Depression Affect New Fathers Too

The simple answer according to the New York Times article, “Having a Baby, Depression Affects New Fathers, Too,” is yes it does, although scientists are not sure exactly why. There is an increased chance of depression between three to six months after a baby is born. In order to understand this, you have to know what postpartum depression is, how it works in both men and women, and what could be contributing factors.

Typical post partum depression is thought to be caused by the hormonal and chemical changes in a woman’s body after birth. These changes when combine with the responsibility and stress of a new baby, causes a mother to become depressed and anxious in the months following the birth. This can lead to the even more serious post partum psychosis. Post partum psychosis is characterized by: 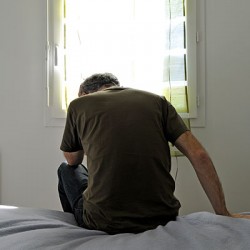 It is possible for new fathers to experience depression, though it is less often reported.

Post partum psychosis is extremely dangerous and rare. Post partum depression is more common and usually this goes away after a few months and it is treatable through a variety of medications and therapies.

It was not until recently that post partum depression in fathers was discovered. Just like the incidents of depression and other mood disorders in men, this type of disorder was largely ignored by the public and the fathers themselves. Most people just passed it off as stress and a reaction. According to the Journal of American Medicine, researchers say about one tenth of women suffer from post partum depression with a similar one tenth of fathers suffering from it too.

In women, post partum depression is attributed to hormones and stress. Men lack the hormonal rush that women have but they suffer the same series of depressive symptoms. These symptoms are:

Not all men experience all of these symptoms. The depression can also show up as something else but there usually is an irritable or violent component to it. Men are just as likely to get post partum depression as women are but they are less likely to report it to their doctor. They are also less likely to take medication for it even if it is prescribed.

All of these are signs and symptoms of male post partum depression. Most men who go through this report having one more or more of these signs. Most fathers do not report the depression because of the social and gender based roles they are taught to play. This is especially true when the mother is going through depression as well.

We know that men do suffer from post partum depression. This is not a myth. Although the exact cause of it is unclear, about 10 percent of the men who have children suffer from it after one or more births. This is about the same as it is for women. Fortunately there is treatment for it. Sometimes this treatment is as simple as a medical diagnosis and some counseling, other times it is more involved. Like most depression, post partum depression is treated with counseling and the proper medication. Men no longer have to suffer in silence when this type of depression strikes.