Mood dysregulation disorder is, according to NCBI, “a syndrome defined to capture the symptomatology of children whose diagnostic status with respect to bipolar disorder is uncertain.” It is a syndrome that occurs, usually in children, who exhibit persistent irritability. While the disorder is defined mostly by that characteristic, it is also defined by the lack of “well-demarcated periods of elevated or irritable mood characteristic of bipolar disorder.”

It is also sometimes referred to as:

Why Does Mood Dysregulation Disorder Occur in Children?

Children who experience extreme irritability and tantrums that do not correlate in their extreme and violent intensity with the situation at hand may be sufferers of mood dysregulation disorder. Sometimes, children with mood dyregulation disorder will become very angry, irritable, or throw a tantrum over something very minor. This behavior is persistent and chronic.

What are the Symptoms of Mood Dysregulation Disorder? 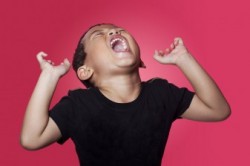 Very irritable children may be suffering from mood dysregulation syndrome.

The common symptoms of mood dysregulation disorder are:

Many times, these issues occur in children who are too old to throw tantrums of this magnitude. Another critical factor is that these symptoms should have been going on for at least a year before the child is diagnosed with mood dysregulation disorder.

CU-Bolder states that these symptoms must be “present in at least two settings (at home, at school, or with peers)” in order to be considered mood dysregulation disorder and that it must be “severe in at least one setting.” Parents who are concerned that this may be an issue for their child should stay in touch with teachers and observe their children with friends as to help narrow down the possibility.