What is a stigma? A stigma labels people, giving them a negative mark that sets them apart from the rest of society. They become part of a stereotyped group with a negative connotation to them. This negative connotation creates a prejudice that can lead to discrimination and negative actions against them. If you list a mental illness on a life insurance application, you will be turned down flat, with no further questions. You are seen as being more susceptible to committing suicide, and there fore at more of a risk for an insurance to company to have to pay out.

Even the dictionary definition gives an example of the word stigma as “the stigma of mental illness.” But studies have shown that when the public learns about a person, like a celebrity, who lives with a clinical disorder, manages it well and experiences a rewarding life, stigma is reduced.

Celebrities have the safety, so to speak, of being successful despite having depression or bipolar disorder, or ADHD, or another emotional disorder. By speaking out though, and discussing the battles they’ve waged against their own demons, they can help people see that mental illness is not a barrier to success, and that having a mental illness doesn’t, and shouldn’t, exclude you from everyday society. One by one in recent years, celebrities are giving interviews, dedicated exclusively to a mental illness they have, which they have been hiding from the world, one that might have prevented them from getting where they are today, due to stigma. 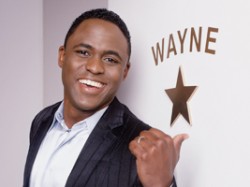 Though he is a famous ‘funny man’, Wayne Brady has talked openly about struggles with depression.

Celebrities have the ears of both of those groups, as well as many others, and can help educate society. And they do it with personality rather than with scientific information, which is often a more approachable way of grasping a subject for people, putting things in terms that are easier to understand. And because celebrities got where they are today by creating a set of followers who want to know everything about their lives, having them share something so personal, something that people don’t just blurt out daily because of the stigma associated with it, somehow makes it more believeable to others. Having them share that information gives people pause, and just maybe will make them think the next time they find themselves talking about, or to, a person with a mental illness.

Robin Williams, who did not reveal his diagnosis of bipolar disorder, ostensibly because of the stigma related to it and how it might affect his career, took his life. Williams was not trying to make a statement with his suicide at all, but had he felt more comfortable to come forward and seek the treatment he needed, the tragic end to his life may never have happened. Williams was once quoted as saying, “I used to think the worst thing in life was to end up all alone, it’s not. The worst thing in life is to end up with people that make you feel all alone.” The stigma of mental illness made Williams feel all alone, even within his celebrity and all the people who surrounded him constantly. Yet he disguised his mental illness and did it so well that he slipped through the fingers of many people who could have helped him.

The bassist for the band Fall Out Boy gave an interview earlier this year where spoke about his own bipolar depression, saying that he saw no reason to be secret about it. “Everybody figures themselves out in a different way. And I think there’s no shame in talking about that kind of stuff. It’s not something you should feel scared … talking about,” he said.

Actress Glenn Close founded a non-profit organization with a mission of de-stigmatizing mental illness when her sister was diagnosed with bipolar disorder at age 50. Her sister admits hiding her symptoms for most of her life, embarrassed about them, until she finally told Close that she couldn’t stop thinking about killing herself. Close’s sister, Jessie, got an official diagnosis and then got the treatment she needed. In time. Not long after that, Close’s nephew was diagnosed with schizophrenia. “I think what happens in my family probably happens in millions of other families,” Close said, “we just had no vocabulary for mental illness…I said, well, this has been under my nose for a disturbingly long time,” and she had no idea because her family members were trying to hide what they knew would cause them to be discriminated against, and would make life even harder than it already was.

Last fall, Wayne Brady, comedian-turned-TV star of shows like “Whose Line Is It Anyway?” and “Let’s Make a Deal,” gave an interview to ET about the years he secretly battled with depression. Partly because he was a comedian and partly because he was trying to hide his emotions, he said, “People are like, ‘Wayne Brady’s always happy!’ No I’m not. Because I’m human.”

But being able to face the stigma and admit his depression, got him on the track to treatment. “It took me a while to get my stuff together to go, ‘You know what? If you’re not happy, you have to do something about it,'” Brady said. “Just to admit that you are feeling this way is a huge step. To claim that, to say, ‘Why do I feel dark? Why do I feel unhappy? Let me do something about this.'”