People affected by bipolar disorder experience extreme mood changes that often result in destructive and even dangerous behavior displays. Data gathered by the National Institute of Mental Health show an estimated 2.6 percent or 5.7 million Americans suffer from bipolar disorder in any given year. The average age of onset for this condition is 25 years old. As bipolar disorder exists as a chronic, long-term condition, most people live with the disorder for most of their lives.

Fortunately, treatment options do exist for people affected by this condition. The most commonly used treatments include medication and psychotherapy. The effectiveness of any one treatment options can vary from person to person. With most if not all treatment options, it does take a certain amount of time before a person will develop a balanced emotional state and lifestyle. 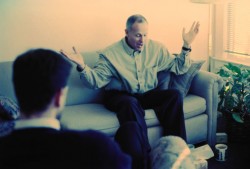 Cognitive behavioral therapy is one method of treatment for manic depression.

Also known as manic-depressive disorder, extreme fluctuations between depression and manic states best characterize what bipolar disorder suffers experience. Periods of depression entail feelings of sadness and hopelessness while manic episodes bring on feelings of euphoria and high levels of energy. According to the Mayo Clinic health site, the length of each period can vary from person to person with some people experiencing mood shifts three or four a times a year while others experience mood shifts on a daily basis. In some cases, a person may experience feelings of mania and depression at the same time.

As a chronic condition, anyone affected by bipolar disorder should be under a psychiatrist’s care. Some medical facilities assign a treatment team made up of a psychiatrist, social worker, psychologist and psychiatric nurse. Depending on the severity of the condition, treatment options typically include medication and psychotherapy though some people have also benefited from attending support groups in addition to the standard treatment approaches.

Medications used in the treatment of bipolar disorder work to stabilize a person’s extreme mood states. Some medications are used to target the symptoms of the disorder head-on, while others may be used to treat individual symptoms, such as depression and anxiety.

Some of the most commonly used medication treatments for bipolar disorder include:

Lithium has a long-standing history as a bipolar treatment medication. Lithium helps to stabilize moods by leveling out extreme emotional highs and lows. Anticonvulsants work best for people who experience mixed episodes. Antidepressants are used to treat depression symptoms or depressive episodes. In many cases, doctors prescribe more than one medication in order to create a balanced effect.

As with any other type of psychological condition, people with bipolar disorder develop unhealthy and/or unproductive coping behaviors to compensate for their symptoms. Over time, these coping behaviors affect the way a person views his or her role within relationship interactions with friends and family. Psychotherapy treatment, more specifically, cognitive behavioral therapy enables a person to identify unhealthy coping behaviors and replace them with more productive behaviors. Cognitive behavioral therapy also helps bipolar suffers take on less destructive roles within their relationships with others.