How to Help Your Child Cope with Adolescent Depression

Much like adult rates of depression, a high rate of adolescent depression exists in the United States. According to a Northern Illinois University report, one out of every 8 adolescents is diagnosed with depression, with females twice as likely to develop the condition.

In this country alone, an estimated 5,000 adolescents diagnosed with depression commit suicide within any given year.

Within a teen’s daily life, depression can affect his or her mood, school performance and ability to socialize with peers. Some of the most common symptoms of adolescent depression include: 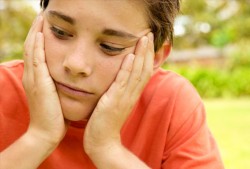 You can help your child overcome depression!

Depression disorders, in general, stem from chemical imbalances in the brain affecting a person’s thinking and emotions. From within this state, a person has difficulty seeing things that others can easily spot since depression clouds a person’s judgment and decision-making abilities. Unless something is done to remedy these imbalances, depression symptoms can become progressively worse with time.

Teenagers exhibiting adolescent depression symptoms are often unable or unwilling to communicate how they feel or what they’re going through. Parents who suspect adolescent depression should reach out and communicate their concerns with their teen in a nonjudgmental, caring way. It’s not uncommon for a teen to deny a problem exists out of feelings of fear or shame. Oftentimes, teenagers have a hard time expressing how they feel when it comes to inner conflicts and turmoil.

Parents may want to point out specific concerns when talking to their teens by identifying specific changes in appearance or behaviors. Parents who have doubts that depression may be the cause should still open up the lines of communication with their teens since some sort of problem may still exist. As many adults will deny being depressed, this can be especially the case with teenagers. Even in cases where a teen all-out denies being depressed, parents should trust their instincts overall rather than risk letting adolescent depression symptoms get worse with time.

A teen experiencing adolescent depression will tend towards isolation, which limits his or her ability to connect with others. This lack of connection in general can actually worsen a teen’s depression symptoms. Encouraging teens to seek out healthy friendships can help increase their confidence and keeps them connected with others.

Daily exercise can go a long way towards restoring brain chemical imbalances. Encouraging teens to join a sports team or find a job can help in keeping them active during times they would normally stay to themselves.

Parents can also help teens stay in touch with their emotions by encouraging them to keep a private journal of their thoughts and feelings. In effect, any outlet for expression can better help them understand what they’re going through.