While the criteria for compulsive shopping disorder closely matches that of a personality disorder, the phases associated with this condition bear a strong resemblance to addiction. Those affected move through four distinct phases of compulsive shopping behavior:

Compulsive shoppers devote a considerable amount of time and energy to carrying out these behaviors, oftentimes at the expense of other important areas of their lives. 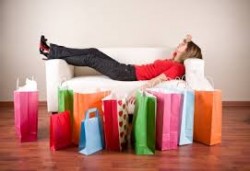 As with any type of obsession, compulsive shoppers connect with shopping on an emotional level. Someone affected by compulsive shopping disorder experiences distinct emotions within each phase of the activity.

This same array of emotional responses occurs for people who struggle with alcohol and drug addictions.

More oftentimes than not, a compulsive shopper will shop alone or possibly with friends who share the same affliction. In effect, shopping is a private pleasure that can potentially embarrass a person in the eyes of someone who doesn’t share the same obsession.

While spending money is a big part of compulsive shopping disorder, income (or lack thereof) doesn’t deter compulsive shopping behaviors for people affected by it. Instead, income level will dictate where a person shops, such as at thrift stores and consignment shops versus department stores.

Someone with limited financial resources may veer more so towards buying in bulk and buying on sale rather than seeking out big-ticket items. As far as item preferences go, clothing, shoes, music and jewelry make-up the majority of shopping purchases.

As with any other type of disorder or addiction, these symptoms will only get worse over time unless a person seeks out needed treatment help.