Is Compulsive Gambling a Disorder?

Gambling while on vacation or buying the occasional lottery ticket poses little to no threat to a person’s overall quality of life. When done on a recreational basis, gambling can be a fun activity. Compulsive gambling, however, takes gambling activities to a whole other level.

More oftentimes than not, compulsive behaviors result from some form of obsession that overwhelms a person’s ability to control or manage the behavior. These characteristics most resemble addiction-type behaviors without the drug or alcohol component. Not unlike drug/alcohol addictions, compulsive gambling behaviors trigger physiological changes and behavioral changes, both of which have a noticeable impact on a person’s everyday quality of life.

Addiction describes a disorder characterized by a loss of control, so compulsive behavior becomes a key component within any form of addiction. Process-based addictions involve activities where a person loses control over his or her ability to walk away from further engagement. Compulsive gambling behaviors fall within the process-based addiction category.

Much like addictions to alcohol and drugs, a person may start out gambling on an infrequent basis as a form of recreation. For people with addiction tendencies, the fun or thrill of engaging in the activity becomes a force all its own, similar to how a drug “high” drives addicts to keep using.

Ultimately, someone with a compulsive gambling (addiction) disorder will exhibit the following characteristics –

Gambling Effects in the Brain 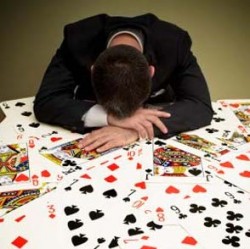 Someone who cannot control their gambling may be said to have a gambling disorder.

For people addicted to gambling, the act of gambling has become an obsession. Obsessions, in general, trigger certain emotional responses, which play a central role in perpetuating this condition.

Likewise, compulsive gamblers experience a “rush” or “high” that produces chemical changes in the brain, much like a drug or alcohol “high.” According to Scientific American, these chemical changes affect the same neurotransmitter chemicals that regulate emotions, learning, cognitive functions and motivation.

Over time, these chemical changes start to “rewire” how the brain works and eventually alter a person’s motivations, thoughts and behaviors. In effect, the more a person engages in gambling the more out of balance brain chemical processes become.

Not surprisingly, these same symptoms can result from drug/alcohol addictions. As with any form of addiction, a person’s gambling behaviors will only get worse unless he or she gets needed treatment help.