Signs and Symptoms of Compulsive Hoarding

What is Compulsive Hoarding?

Compulsive hoarding is when a person stores and collects a large amount of useless items that are of little value. In addition, these items take up the majority of space in the person’s living quarters and these items cause complications and get in the way of a person’s day to day activities.

Compulsive Hoarding and other Addiction Links

Compulsive hoarding has been linked to obsessive compulsive disorder and is more predominantly seen in people over the age of 50. 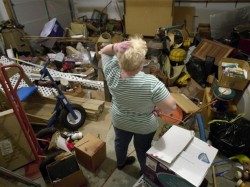 If you have intense difficulty getting rid of things you may be affected by a hoarding disorder.

The number one sign of compulsive hoarding is the intense difficulty getting rid of items. Most people who are hoarders cannot get rid of their items because they feel something bad may occur if they do or they feel an intense connection to their items making it an almost impossible task for them to get rid of any of their items.

Additional signs and symptoms of compulsive hoarding are:

Compulsive hoarding can eventually cause numerous hardships to occur in a person’s life. For starters, hoarding creates a hazardous living environment for a person. Hoarding can cause fires to occur, cause bug infestations, and can jeopardize proper sanitation methods to take place for a person to rid their environment of germs and bacteria. Hoarding often leads to financial hardships being that a person feels the need to purchase unnecessary items. A hoarding disorder can also lead to relationships problems between friends, family and significant others. There are help options that people can get to aide them with overcoming their disorder and if a person is suffering from the effects of compulsive hoarding they should get help from outside sources.