Ever wonder how you managed to accumulate 13 black sweaters or 100 pairs of high heels? Incessant collecting is a metaphor for some deeper, perhaps long-standing issues.

Crystel Riggs has a thing for toothbrushes. ThisSouth Carolinamother bought nine new ones at once because they were on sale, she says. “Now when my toothbrush wears out, I know I will have a new one waiting, and I won’t have to use an old scruffy one.”

June Summers’s “thing” is ceramic houses and cookie jars. She has hundreds, many of which are displayed and many that sit in boxes in the basement. “I couldn’t walk away from a flea market or a yard sale without picking up another piece—whether or not I really even liked it,” she admits. “I was obsessed with having every piece of ceramicware ever created.”

Summers’s obsession with collecting was brought under control while cleaning out her deceased grandmother’s apartment. Grandma had also been a collector, salt and pepper shakers, menus, toothpick holders, hotel room soaps. “It was so depressing when we cleaned out her closets and found all of this stuff,” says Summers. “That’s what was left of her life—stuff. Was she any happier for having it all? All that time and money she spent collecting and hoarding, she could have done volunteer work or purchased things that would have left more of a legacy. That was the turning point for me.”

Though the object of collection may vary, most people have at least one item they just cannot pass up, be it shoes, baseball cards, notepads, little black dresses or toothbrushes. 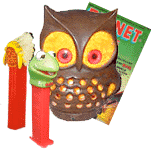 According to Don Haupt, MD, several dynamics contribute to people’s propensity to collect multiples of the same item. “It all goes back to relief of anxiety,” he explains.

It may trace back to childhood, a time when you felt some element of vulnerability. As an adult, you try to distance yourself from that weakness, showing that you are strong and in charge. The thought, says Haupt, is, “if you amass a bunch of things, you’ll have some control over the world.”

Deprivation experienced as a child, says Haupt, can lead to hoarding as a means of compensation. For instance, Carol Marasa now owns over 100 pairs of shoes. She says, “When we were young, we were poor and I owned no more than one pair of shoes at any time. As an adult, shoes give me something I missed as a child.”

“People reward themselves with ‘things’ even when the things aren’t really needed or wanted. Fancy clothes, shoes, etc. are favorites, but ‘toys’ of other types are also common,” says Bonnie Rice, an Illinois-based professional organizer. Rice’s job is to come into people’s homes and help them make sense of the mounds of stuff they have amassed. People may use material goods as a way to assuage anxiety from living a hectic lifestyle.

“Sometimes these ‘things’ function as what we call in psychiatry a transitional object,'” says Haupt. People attempt to fill an emotional hole with a physical object. Then, when it does not work, people buy more in the vain hope that if one did not do the trick, maybe five or six will.

Is It a Problem?

Most hoarding is not dangerous, experts say. “It’s a very common thing,” says Haupt. “It’s not weird.” When hoarding does becomes problematic, however, is when it becomes a priority in your life, taking precedence over relationships, work, or caring for yourself. “It gets to be a problem when [it] takes over our living space or when [it] takes too much of our time,” says Rice.

Taken to the extreme, hoarding can be a sign of obsessive-compulsive disorder (OCD) or mania, says Haupt. Both conditions can be serious and call for medical attention. So how do you know if your hoarding has crossed the line from harmless to harmful?

According to Rice, the challenge is that hoarding can get severe before you admit you have got a problem. We have all heard stories of people with closets full of clothes worth thousands of dollars, with all the tags still on, or packrats who have stacks of newspapers so high that their home is declared a fire hazard, or folks who have basements full of provisions, just in case (of nuclear war, unrelenting weather conditions).

Even when bystanders clearly see the behavior as abnormal, the hoarder remains blind. “Because the hoarder can rationalize each and every item, he can’t let any of it go,” says Rice. “And there is no progress in the hoarding behavior without parting with at least some of the collection.” Unless you have a defining moment, like the one Summers experienced in her grandmother’s apartment, letting go and giving up can be physically and emotionally wrenching.

How Do You Clean Up Your Act?

Maybe your behavior is not severe enough to interfere with normal functioning, but you want to kick the hoarding habit, regardless of how benign it seems. You are just not sure where to start.

“The first step in breaking the habit is to look at what you’re doing and think about your reasons,” recommends Rice. “The reasons don’t usually stand up that well once you get them out in the open.” Next, try to pare down, setting realistic goals. You may not be able to immediately toss most of your classical CDs just because you realize you do not need seven versions of Pachalbel’s Canon; instead glean out a few at a time. If you are motivated by money, try selling them. Some people find the prospect of raking in cash at a giant yard sale irresistible.

You will likely run into some resistance as one part of you cries, “But what if I NEED this?!” Rice says, “Think about what is the worst thing that might happen: you’ll get another one if the need arises. Is that so much worse than the certainty of spending your time and space on the stuff?” That is why some people find it easier to clean out their collections if they offer them to friends or family. “At least then, it stays in the family, and I can have it back if I need it,” says Simone Roth.

Your hoarding side also may try to convince you that your things may be valuable one day, right after you decide to toss them out. Realize that likelihood is small. And even if it did occur, would you be able to find the items among all your other things? If you cannot do it on your own, have someone else, a friend, relative or even a professional organizer give you a hand.