What is Gender Dysphoria?

Issues surrounding gender can easily go unnoticed when a person’s sense of self “naturally” coincides with cultural expectations. For a person whose sense of gender identity contradicts societal expectations, his or her quality of life will likely suffer.

Though gender dysphoria affects only a small percentage of the overall population, it’s nonetheless distressing for those who must live and work within everyday society.

According to the U. S. National Library of Medicine, the overriding issues defining gender dysphoria stem from the disparity between a person’s biological gender and the gender with which he or she actually identifies. In order for a diagnosis of gender-based dysphoria to apply, a person must meet four diagnostic criteria –

Signs of gender dysphoria often become apparent in childhood, especially during the stage when children learn to distinguish males from females. While a gender identity disorder may well influence a person’s overall sexual orientation, the condition exists apart from any particular orientation or preference a person may have, according to Columbia University. In effect, a biological male struggling with this condition would feel like a woman trapped inside a man’s body and vice versa for biological females. 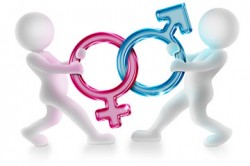 Individuals with gender identity disorder may feel as if they were born in the wrong body.

Symptoms of gender dysphoria tend to vary based on the age of the person. For children, symptoms may include –

With adults, symptoms become more so behavioral and/or acted upon –

While the overall definition of gender dysphoria remains the same, different people may adapt to the condition in different ways. Whereas one person may choose to live as a cross-dresser, the distress and discomfort experienced by another may drive him or her to seek out sex reassignment surgery.

As gender identity conflicts can have a considerable impact on a person’s sense of identity and overall mindset, affected individuals may well be attracted to same-sex partners, though this is not always the case.

Living with gender dysphoria can become a source of considerable distress and emotional turmoil. The ongoing rejection and humiliation experienced by a person can cause other problems to develop, some of which include –

Considering the complications that can arise, diagnosing and treating gender dysphoria early on can greatly enhance a person’s overall quality of life in the long run.