Are you able to respond with the appropriate emotions in a difficult family environment? Are you empathetic with colleagues, but still able to manage stressful business situations? Are you aware of your emotions and able to cope on a daily basis? If so, you may have a high degree of what experts are calling “emotional intelligence,” and it may be what brings you success in life.

Expanding the Notion of Intelligence

Daniel Goleman certainly thinks so. As the author who first brought the term to public awareness in his best-selling book, Emotional Intelligence: Why It Can Matter More Than IQ, Goleman has positioned himself at the center of an industry concerned with the concept of “emotional intelligence.” He is the CEO of Emotional Intelligence Services, the co-chairman of the Consortium for Research on Emotional Intelligence in Organizations, and a popular speaker on the worldwide lecture circuit.

One of Goleman’s main goals is to expand our notion of intelligence and show that “self-control, zeal, and persistence, and the ability to motivate oneself” are crucial life skills. Like Howard Gardner, the Harvard University educator who proposed that “intelligence” has at least seven different varieties, Goleman seeks to influence the way we educate our children and ourselves.

Because his ideas are so intriguing, Goleman’s work has become prominent in the way our culture looks at emotions. Goleman borrowed the phrase “emotional intelligence” from two academic researchers and then used scholarly research to support his ideas. This gave the book a more “popular” orientation than the work of the original researchers, Mayer and Salovey. 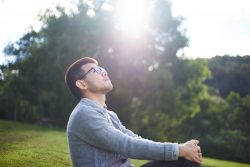 An emotionally intelligent person can recognize a feeling as it’s happening.

John Mayer, PhD, a University of New Hampshire psychologist, and Peter Salovey, PhD, a psychologist at Yale University, began writing about emotional intelligence in the late 1980’s. Acknowledging that emotions and intellect are often thought of as opposites, the two professors began to consider what might be the consequences of a beneficial interaction between the two.

Research had already shown that strong feelings can help people perceive new alternatives or make better choices. Deep emotions, they reasoned, might even make human thinking more rational and profound. This led them to propose that “emotional intelligence”—that is, intelligence inspired by strong emotions—might in fact, make the difference between a conventional decision and a brilliant innovation. In Mayer and Salovey’s example, emotional intelligence might mean the difference “between constructing the Brooklyn Bridge, with its renowned beauty, [or building]…the more mundane 59th Street Bridge.” The authors also proposed that emotional intelligence “allows us to think more creatively and use our emotions to solve problems.”

Goleman was granted permission by the two authors to use the phrase “emotional intelligence,” and then expanded on the concept in many ways. Like Salovey and Mayer, Goleman was interested in the interaction of the emotions and the intellect. But as a science writer rather than a scholar and academician, Goleman had freer rein to generalize from a very wide range of data. Citing neurologic evidence indicating that the amygdala and the prefrontal lobes of the brain are responsible for our emotional responses while the neocortex and other limbic structures are responsible for our rational thinking mind, Goleman constructed his basic argument.

In his seminal work, Goleman described five domains that delineate the parameters of emotional intelligence.

Goleman’s book, in fact, ends with a discussion of educational settings in which children are learning to attend to their emotions and manage their impact. In Goleman’s later work, there is a concern about applying “emotional intelligence” to business situations and other broad life situations.

We probably all know someone whose brilliance is evident, but who has not had much success in life because of social ineptness or a lack of motivation. We probably also have friends who are vastly successful based simply on their abilities to handle social and business situations with finesse and care. The arguments about “emotional intelligence” have brought to public attention the need to consider intelligence as something other than IQ.

The Consortium for Research on Emotional Intelligence in Organizations website.