Which comes first – depression or chronic illness? While the connection works both ways, one thing’s for sure: treatment can make a difference.

Jennifer was 26 years old when her doctor diagnosed her with high blood pressure. But it wasn’t until she learned that she also suffered from polycystic ovary syndrome that she began her slide into depression. Like many other patients with chronic illnesses, she hid her depression from her doctor, even as she underwent fertility treatments and a high-risk pregnancy.

“It’s so hard to deal with a chronic illness,” says Jennifer, now 29. “Many people are afraid to admit that they need help.”

After the birth of her son, she broke down and told her doctor of her depressive symptoms—her self-imposed isolation from others, withdrawal from relationships, sleeplessness, and feelings of hopelessness. He helped her understand that like her other chronic conditions, her depression was not her fault. She began taking an antidepressant, and her outlook improved.

“It has helped tremendously,” she explains. “I needed it to keep things in perspective for me, which it did.” 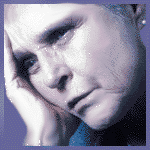 When faced with a potentially life-changing diagnosis of a chronic condition, it can be easy for depression to set in.

“Any illness that in some way seems to increase an individual’s helplessness and hopelessness will also be a trigger for depression,” says Jeremy Kisch, PhD, senior director of clinical education at the National Mental Health Association. Depression is easy to overlook in part because some of its symptoms—like fatigue or change in energy levels—mimic those of some chronic illnesses.

When Depression Leads to Illness

In cases like Jennifer’s, it’s pretty clear that the illness led to depression. But for scores of other patients with conditions like heart disease and diabetes, the connection can be the reverse.

People with a history of depression are at least three times more likely to suffer from heart attacks than their non-depressed peers, according to William Eaton, PhD, professor of mental hygiene at the Johns Hopkins School of Hygiene and Public Health. “That ranks depression in the same strength as a risk factor as high cholesterol or family history of heart disease,” he says.

Depression is also associated with type 2 diabetes, Dr. Eaton explains, adding that the links between depression and these illnesses likely work on different levels. “It could be behavioral—depressed people eat differently or exercise differently,” says Dr. Eaton. “But it’s also possible that it may work under the skin. In a person who is depressed, the blood clots differently, the immune system works differently, the heart beats with a different variation.”

There may be some people who suffer from depression, but go undiagnosed. Dr. Kisch believes that at least some of the minimalization of depression stems from the patients themselves. “It seems to be a natural consequence of what they’re struggling with physically,” he says. “They don’t realize that it’s depression.”

For many chronically ill patients who are depressed, it’s a Catch-22. Their depression saps their energy, leaving them withdrawn and less likely to actively seek help from their healthcare providers.

Dr. Kisch says family and friends can play an important role in helping bring depression to light in patients with ongoing health problems. “It requires someone on the outside to be able to say, ‘Maybe you’re having more difficulty because you’re depressed in addition,'” he says.

Dr. Eaton, on the other hand, sees doctors becoming more aware of the importance of screening for depression, and incorporating it into their daily routines. “It’s as easy to screen for depression as it is to take a blood pressure,” he says. “Depression has got to be brought into medical care generally.”

No matter when depression strikes, if it accompanies some chronic illnesses, the ramifications can be serious:

Although not all chronic diseases are as closely related to depression as diabetes, heart disease, and asthma, the way depression exacerbates symptoms makes it a particularly dangerous risk factor.

Kisch, Eaton, Mancuso and other experts don’t believe that any single factor ties depression with chronic illness. The complex cause-and-effect relationships may never be completely understood, though studies are aimed at pinpointing specific risk factors and discovering optimal treatments. In the meantime, the doctors say that raising awareness of the prevalence of depression in patients with chronic illness may help more of them receive appropriate treatment, whether it’s psychotherapy, an antidepressant, or some combination of the two.

Already, doctors have seen that successful treatment of co-occurrences of depression shows promising benefits. This doesn’t surprise Jennifer, who continues to manage her depression daily. After taking control of her depression, she has been better able to accept and deal with her other chronic illnesses. She thinks it’s unfortunate that depression is not better understood and its treatment more accepted by the general public. “Depression is a medical condition, just like other conditions,” she explains. “It’s okay to ask for help.”

Doctors and patients should look for the following symptoms as clues of depression, especially in the presence of other medical conditions: