Is Childhood Clinical Depression Preventing Your Child from Learning?

While adults may be more prone to develop depression symptoms, children and adolescents can become vulnerable as well. According to an American Family Physician report, childhood clinical depression affects two percent of pre-pubescent children and as much as five to eight percent of adolescents in any given year. As depression covers a spectrum of severities and symptoms, a child can experience mild as well as severe forms of depression. 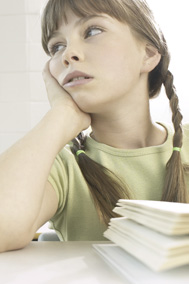 Problems concentrating, low energy levels, headaches and school phobia are some of the warning signs.

Symptoms lasting more than two weeks may indicate a clinical depression condition exists. Equally important are the effects these symptoms have on a child’s ability to carry out everyday activities, such as functioning within a classroom setting and interacting with peers.

As with adult depression disorders, there’s a high likelihood a child will also experience and display anxiety disorder symptoms as well. The inner turmoil a child experiences as a result of depression and anxiety symptoms can greatly impair his or her ability to learn in both the classroom and at home.

As children have little control over their surrounding environments, they can easily internalize distressing emotions when family conflicts or problems at school arise. Childhood clinical depression symptoms develop as modes of expression for internalized emotions. Symptoms displayed may include:

According to the U.S. Library of Medicine, the features of childhood clinical depression can impair a child’s ability to learn in the following ways: