Compulsive overeating disorder works in much the same way as other forms of addiction, overwhelming a person’s power to choose in spite of looming negative consequences. When left untreated, this condition only gets worse, gradually taking over a person’s life while causing considerable physical and emotional distress along the way, according to the National Institute of Mental Health.

Fortunately, treatment options for compulsive overeating disorder offer an effective means for overcoming this condition. Through ongoing behavioral-based treatments, a person comes to develop a healthy mindset towards food and the role it plays in his or her life. 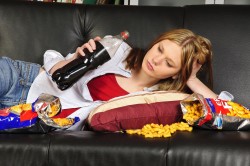 Food is like a drug for someone with compulsive overeating disorder.

In one way or another, everyone develops an emotional connection with food that may be harmful or beneficial. In effect, food nurtures the body’s physical need for sustenance. Food’s ability to meet this need forms the basis for a connection to develop.

With compulsive overeating disorder, a person’s connection with food has reached the point where he or she uses food to cope with daily life stressors and pressures. Much like how addicts use drugs and alcohol, compulsive overeaters use food as means for feeling better about themselves and their life circumstances.

Treating compulsive overeating entails identifying the underlying emotional issues that drive eating behaviors. In some cases, medical problems may be contributing to overeating behaviors so most treatment programs will conduct a full assessment of a person’s physical and psychological status.

In effect, treatment addresses any areas of a person’s life that contribute to overeating behaviors. Treatment program objectives typically include:

The interpersonal therapy approach to compulsive overeating disorders views negative social interactions as a primary motivator for overeating behaviors. In this regard, a person uses food to cope with negative or unfulfilling relationships in his or her life. In the process, ongoing weight gain creates a cycle of isolation and hurt feelings.

Interpersonal therapy helps a person develop healthy ways of communicating his or her needs with loved ones while working through self-image and self-esteem issues.

Under these conditions, getting treatment for co-occurring psychological problems is essential to seeing any type of progress towards a healthy eating lifestyle. Ultimately, treatment programs employ an integrated treatment approach that addresses both problems at the same time rather than treating them individually.