When someone abuses cocaine in the long term, side effects can occur that constitute a type of cocaine induced psychosis. The individual will start to show signs of a disorder that is similar to schizophrenia, even if they have never experienced anything similar to this before. It is important to be aware of the signs and symptoms of cocaine induced psychosis so that you can identify them in yourself or others and get the treatment needed in such a case.

For the most part, cocaine induced psychosis is a mental disorder. It occurs when an individual has been taking cocaine for a prolonged amount of time (usually months or years), and they experience changes in the way the brain works caused by their use of cocaine. This is why most of the issues that occur with cocaine psychosis are psychological and, therefore, experienced only by the patient.

The most common symptoms of cocaine induced psychosis are:

These symptoms may all occur with varying degrees of severity, but it is safe to say that if you have never experienced them before and are abusing cocaine in heavy amounts that they are being caused by the drug. Sometimes, someone who does not realize that they already have a mental disorder like schizophrenia might abuse cocaine and strengthen or uncover these symptoms, so without proper treatment, it can be difficult to be sure.

The NIDA states, “Users take cocaine in ‘binges,’ during which the cocaine is used repeatedly and at increasingly higher doses.” This can lead to cocaine induced psychosis so look for the symptoms of this disorder and seek treatment as soon as possible. 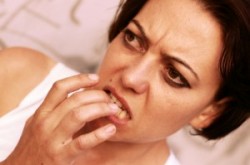 Experiencing paranoia, restlessness, and delusions are all signs of cocaine psychosis.

It can be difficult to be sure whether or not someone has this disorder temporarily as a side effect of cocaine abuse or if these symptoms point to a disorder that already existed before. The important part is getting the person into treatment so their needs and treatment plan can be sorted out. The signs of cocaine induced psychosis are usually very clear as the individual experiences strong mental symptoms that manifest in there behavior. They will also most likely:

The signs of cocaine induced psychosis will usually show a person unable to connect to reality and becoming unstable, violent, and dangerous. If you notice any of these behaviors or physical signs in someone you love who abuses cocaine regularly, they are likely experiencing this kind of psychosis. The only way for them to get better is to receive formal substance abuse treatment which will mostly consist of therapy and possible medications to lower the symptoms of psychosis.

How Can I Be Sure…

That these symptoms and signs are only caused by the cocaine abuse itself and not by a possible psychosis that has gone untreated and been fueled by my cocaine abuse? The only way to know for sure is to seek help. If you do, your condition will be treated either way, and you will be able to slowly get your life back. It is important to seek treatment as soon as possible before your condition becomes worse.