What is Body Dysmorphic Disorder?

Body Dysmorphic Disorder, or BDD, is a type of mental illness. It is characterized by an obsession with one’s body and outward appearance. A person suffering from BDD will see bodily characteristics as defective and in need of correction when they are outwardly quite normal or attractive. They may constantly and compulsively check their appearance in a mirror, or wear excessive amounts of makeup. Some people may even opt for extreme cosmetic surgeries in order to “fix” their bodies when there is actually no need to do so. They may withdraw from society because they feel that their perceived “defect” makes them intolerable to others. Body dysmorphic disorder sufferers also tend to experience depression and anxiety due to their belief that they are physically unattractive. The disorder typically develops in adolescence, and according to the National Institutes of Health, the disorder is even more common than anorexia. How is such a disorder treated?

How is Body Dysmorphic Disorder Treated? 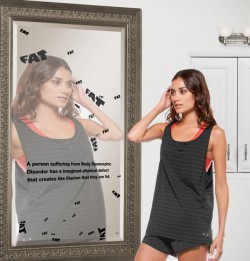 Body dysmorphic disorder treatment can help with your self image.

People who are diagnosed as suffering from BDD have a variety of treatment options available. The most common methods include a combination of medication and therapy.

Cognitive behavioral therapy (CBT) is a tool that teaches BBD sufferers how to manage their negative self-image. The therapist and the patient work together in order to learn how to recognize the patient’s thought patterns and moods. As the patient builds an awareness of how their thoughts impact their self-image, they can begin to use coping mechanisms that are taught to them by the therapist.

Medication can also be used with CBT in order to provide the best possible tools for managing a person’s condition. Selective serotonin reuptake inhibitors (SSRIs) are typically prescribed to people who suffer from depression. Because depression can be a common symptom of body dysmorphic disorder, SSRIs tend to help people diagnosed with BDD. These medications can provide relief from the obsessive thoughts and behaviors that characterize the disorder. The dosage recommended is usually much higher for BDD patients than it is for those who only experience depression or anxiety.

Sometimes more intensive treatment is needed. In very extreme cases, a person suffering from BDD may require hospitalization. If a parson is at risk for harming themselves because of their inability to cope with their disorder, then they may have to be committed to an inpatient facility. This is for their physical safety, as BDD sufferers are often at a higher risk of attempting suicide. Due to the fact that BDD often accompanies eating disorders, patients may find that inpatient rehabilitation centers that treat these disorders can provide them with the help that they need.

Body dysmorphic disorder is a serious issue. If treatment is provided quickly and efficiently, then a patient has a high chance of recovering and leading a normal life.