Most people are concerned with their appearance. Those who suffer from this type of disorder are not only critical of their appearance, but actually fail to see themselves accurately. In this delusional state, a person may begin to resort to extreme measures to correct the imagined body flaws. They may also develop odd behaviors to manage their anxiety about the way they look.

A person who has developed a dysmorphic syndrome about their body is unable to stop the intrusive thought about the defect. In an effort to correct the problem, they may resort to unhealthy diets, obsessive exercise, heavy makeup or other forms of camouflage. They may adopt odd body postures or clothing in order to hide the flaws. They may appear to display narcissistic behavior, as they are constantly checking mirrors or asking others how they look.

A person afflicted with this disorder is not only unhappy with their appearance, but actually cannot stop thinking about it. They often irrationally believe that the perceived faults are affecting them at work or in their personal day to day life. These people may in time become reclusive or they may suffer from extreme anxiety as they attempt to prevent others from seeing the imperfection.

Who Is at Risk? 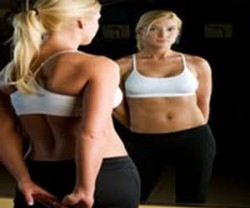 Body dysmorphic disorder can cause many problems for the person suffering.

Only about one percent of the population will develop this type of mental health issue. Body dysmorphic behavior can be closely related to obsessive-compulsion and social anxiety. Those who suffer from eating disorders may also develop similar symptoms. Both male and female teens and adolescents are the most likely to become delusional about the characteristics of their body and appearance. It is unknown at this time what genetic factors put an individual at risk of developing body dysmorphic disorder.

It is possible for people who are not suffering from a true disorder to display some of these symptoms. Many adolescents will become overly concerned and highly critical of their appearance as they go through their teenage years. This does not necessarily indicate that they are actually seeing imperfections that are not there, or that they are developing delusions.

A person with body dysmorphic disorder will not be able to see their own true appearance. They might be thin to the point of emaciation, and yet believe that the mirror is showing a person with considerable belly fat. This leads to the increasingly dangerous and obsessive attempts to correct a problem that is not there.

How Can You Treat Dysmorphia?

There are several methods that are used to treat those with this type of disorder. Cognitive behavior therapy is one technique that is often used. This type of treatment is often used to help redirect unhealthy behaviors into more productive actions. Some medications may be helpful to reduce obsessive thinking or offer relief from anxiety.