Trichotillomania is a serious disorder that affects many people the world over. While the name may be difficult to pronounce, it is easy to understand what this condition is all about.

Here is a basic definition, as shared by the Mayo Clinic:

“Trichotillomania is a disorder that involves recurrent, irresistible urges to pull out hair from your scalp, eyebrows or other areas of your body, despite trying to stop.”

To some, this sounds like a disorder that should be easy to overcome. However, those who suffer from the condition realize that nothing could be further from the truth. They are well aware that beating this disorder is a challenge on many different levels.

Hair pulling can result in a variety of problems, including bald spots. The resulting appearance can lead to interference in the person’s social and work life.

Note: people who suffer from trichotillomania will often times do whatever it takes to disguise hair loss.

There are people who only have a mild case of trichotillomania. These people often have the ability to deal with the problem on their own. On the other side of things, there are people who have a compulsive urge to pull hair out of their own body. Even though they know it will alter their appearance, they continue to do so.

If you are struggling with trichotillomania know that help is available. Call 800-598-5053 (Who Answers?) toll free to discuss treatment options.

What are the Symptoms? 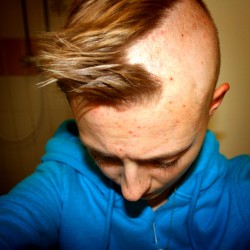 Do you believe you are suffering from trichotillomania? Do you get the feeling that a loved one is faced with this serious condition? If so, it would be in your best interest to become familiar with the most common signs and symptoms of the disorder. This allows you to pinpoint the problem, thus getting the necessary level of help.

Some of the most common symptoms of trichotillomania include:

Note: while not always the case, the majority of people who suffer from trichotillomania also pick their skin, chew their lips, and/or bite their nails. This is just another one of the more common symptoms of trichotillomania.

It is easy to believe that all people with trichotillomania are the same, however, this is not necessarily true.

There are two types of hair pulling:

It is not uncommon for a person to take part in both automatic and focused hair pulling, depending on how they are feeling and what they are doing at that time.

There is no cure for trichotillomania, and it is considered a long term disorder. Fortunately, there are treatment options that can help a person better deal with the condition. Some people are able to completely overcome the disorder.

If a person is left untreated for trichotillomania, symptoms often times worsen. Call 800-598-5053 (Who Answers?) to learn about treatment options.

The Many Risk Factors

In addition to the symptoms of trichotillomania, you should learn more about the risk factors that can cause the condition. These include:

Nobody wants to be faced with this disorder, but there are ways to put it in the past. Over the years, there have been many studies on the impact of trichotillomania, as well as treatment options. For example, habit reversal training is one treatment strategy to consider.

If you or a loved one is displaying the signs and symptoms of trichotillomania, it may be time to consult with a qualified medical professional. There are people who can overcome this disorder without professional help, but it is easier said than done.

If nothing else, knowing the symptoms of trichotillomania can help you or somebody in your life get the appropriate help without delay. We can help you find the best treatment for your personal situation. Call 800-598-5053 (Who Answers?) today.