Agoraphobia is an extreme and intense fear of being in crowded places or closed off places with other people where there is not an easy escape path. Agoraphobia symptoms may vary from person to person but they can be severe and the majority of people who suffer from agoraphobia need outside treatment to help them overcome their fear.

The main way agoraphobia impacts people’s lives is the imprisonment aspect of the disorder. Agoraphobia keeps people from enjoying events and having new life experiences. Depending on the intensity of the disorder, some people never even leave their homes because of the fear and symptoms that they experience from the disorder. One of the problems with agoraphobia is that it can create a domino effect with other disorders and ailments, such as depression from lack of socialization, anxiety, obesity, and suicidal thoughts.

Human beings are meant to move and work and just as people’s bodies need exercise to stay healthy, people’s brain need that as well, and the brain gets some of that exercise through socialization and processing new knowledge. Agoraphobia, in a sense, limits a person from opportunities that they need to stay healthy both psychically and mentally. 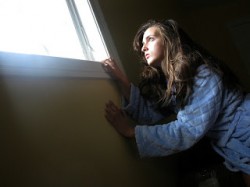 Your agoraphobia symptoms maybe different from others.

The symptoms for agoraphobia are not always noticed in people because people avoid the situations that they fear, therefore not exhibiting the physical symptoms.

The top two symptoms for agoraphobia that are clearly identified when a person suffering from the disorder is in a crowded a place are rapid heart rate and trouble breathing. These are the two main symptoms that stem from the anxiety that agoraphobia causes in people. However, people react to anxiety in different ways and these two symptoms might not be as present when they are feeling anxious, instead they may get clammy hands and start sweating a lot.

The two main cognitive symptoms for agoraphobia, according to www.nhs.uk are when a person thinks

This way of thinking prevents people from going out and keeps them from doing things that they want to experience but fear that they cannot.

The fifth symptom of agoraphobia is behavioral and is when a person manipulates their environment to the point where they will purposefully avoid any place or situation that includes crowds of people. If a person is doing this, then they most likely are suffering from agoraphobia.

A person exhibiting any of the symptoms of agoraphobia should try and figure out what the cause of the problem is and try and get help. Numerous people suffer from agoraphobia but many of them do not seek help and the symptoms for the disorder tend to grow larger and limit them more.