Treatment for OCD in Children

For both children and adults, obsessions drive the behaviors characteristic of obsessive-compulsive disorder, also known as OCD. According to the National Institute of Mental Health, obsessions can take the form of thoughts, routines and rituals that quickly take over a person’s daily life.

Much like the compulsive behaviors carried out by adults, such as opening and closing doors or repeated hand washing these same behavior displays characterize OCD in children. In effect, children suffering from obsessive-compulsive disorder cannot control their behaviors or the thought patterns that drive them.

Treatment for OCD in children may include medication therapies as well as ongoing individual and family therapy. Ultimately, the symptoms associated with OCD in children stem from feelings of anxiety that develop out of repetitive thought patterns. 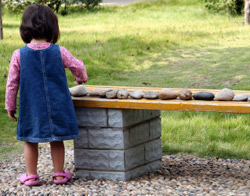 According to the U. S. National Library of Medicine, the clinical features associated with adult obsessive-compulsive disorder remain the same for OCD in children. Compulsive behaviors plainly appear obsessive in nature and persist for a minimum of two weeks. In effect, these behaviors become a source of distress for the child, and interfere with his or her daily activities.

Symptoms of OCD in children have the following characteristics:

OCD in children can also develop in cases where a child lacks the insight to distinguish appropriate from inappropriate behaviors. When this is the case, the child is unlikely to resist carrying out compulsive acts.

Treatment Criteria for OCD in Children

According to the University of Rochester Medical Center, the type of treatment a child needs depends on a range of factors, some of which include:

Approaches used to treat OCD in children usually combine psychotherapy with a medication regimen. Since obsessive-compulsive disorder involves a mental and a behavioral component, psychotherapy approaches will likely use a combination of cognitive and behavioral techniques.

Cognitive therapies help children better understand their fears while developing healthy coping behaviors in the process. Behavioral therapies involve drawing up guidelines that work towards limiting and eventually eliminating compulsive behavior routines, such as limiting the number of times a child can wash his or her hands.

As OCD symptoms tend to become worse when left untreated, the likelihood a child will just “grow out it” is slim, so getting needed treatment is a must.