Signs of Obsessive-Compulsive Disorder that You May Not Notice

In today’s world, exercising a certain degree of caution and due diligence makes good sense both now and in the long run. For someone struggling with obsessive-compulsive disorder, due diligence reaches a whole level creating a stressful, day-to-day experience overall.

According to Psychology Today, an estimated two percent of the U. S. population suffers from obsessive-compulsive disorder, which exceeds rates for bipolar disorder, schizophrenia and panic disorder. While movies and sitcoms give fairly accurate depictions of what it’s like to live with this condition, a few key signs and symptoms can easily go unnoticed.

Like any form of mental illness, the sooner you can spot signs of obsessive-compulsive disorder, the better your chance of getting needed treatment and overcoming its effects in your life. 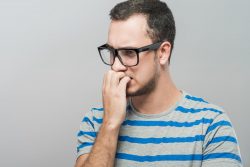 Someone with OCD may fear that they’ll harm themselves or others.

Obsessive-compulsive disorder, also known as OCD, can be a potentially disabling condition steeped in anxiety and dread. As one of the more intensive anxiety-based disorders, OCD consists of two primary components that act as tag team partners: obsessions and compulsions.

According to the National Institute of Mental Health, obsessions exist as thought-based fears that become fixations, such as a fear of germs or danger. Obsessions take the form of intrusive thought patterns that gradually take over a person’s awareness.

While obsessions can take most any form, people affected by obsessive-compulsive disorder tend to fall within one of the following five category types:

While many people may engage in one or more of the above behaviors every now and then, OCD has more to do with the degree to which these thoughts and behaviors interfere with one’s ability to function in daily life. In effect, someone with obsessive-compulsive disorder experiences considerable emotional distress to the point where he or she loses the ability to hold down a job, maintain a home or maintain relationships.

In the absence of needed treatment, obsessive-compulsive disorder symptoms only worsen in severity over time. Ultimately, a person can reach a point where obsessions completely take over his or her daily life making the condition all the more difficult to overcome

If you suspect you or someone you know may be struggling with obsessive-compulsive disorder and need information on available treatment options in your area, please don’t hesitate to call our toll-free helpline at 800-598-5053 (Who Answers?) to speak with one of our addictions specialists.