How Treatment Helps You Cope with Obsessive Compulsive Thoughts

OCD, also known as obsessive-compulsive disorder, affects an estimated two to three percent of the U. S. population, according to the Villanova University. People suffering from obsessive compulsive thoughts often experience considerable disruption in their daily routines. These thoughts are intrusive and can at times be distressing since those affected have little to no control over them.

Obsessive compulsive thoughts are a driving force behind OCD behaviors. As with most any anxiety/emotion-based disorder, destructive thinking patterns lie at the heart of OCD.

How Does OCD Work?

Much like the name implies, obsessions and compulsions are the primary components that make up obsessive compulsive disorder. Obsessions take the form of recurrent, irrational thought patterns that persist throughout the day.

Compulsions take the form of behaviors brought on by obsessive thought patterns. Compulsive behaviors essentially mirror the repetitive thought patterns running through a person’s mind. OCD sufferers engage in these behaviors to gain a sense of temporary relief from the perceived fear that drives the obsession.

Behaviors associated with these themes may take the form of:

Research into OCD reveals both genetic and environmental factors may trigger its onset. According to the American Psychiatric Association, one-third to half of OCD disorders stem from faulty information processing in the brain that starts in childhood. In effect, people with OCD tend to “get stuck” on certain worrisome thought patterns.

These treatments not only help relieve symptoms, but also enhance a person’s overall quality of life and ability to function effectively. 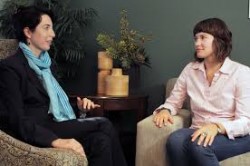 As a treatment approach, cognitive-behavioral therapy, also known as CBT, helps OCD suffers work through the irrational belief systems that feed obsessive compulsive thought patterns. CBT does this by gradually exposing a person to situations that evoke feelings of anxiety while training him or her not to carry out the compulsive behavior these feelings trigger.

Over time, the anxiety that arises from the obsession lessens in response to not engaging in compulsive behavior routines. By weakening the obsession, a person can regain control of his or her thought processes and behaviors.