Obsessive-compulsive disorder (OCD), an anxiety-driven condition, leaves a person at the mercy of uncontrollable thoughts, behaviors and rituals. While many people encounter nagging worries, such as forgetting to turn-off the coffee pot, the symptoms of obsessive-compulsive disorder become so pronounced that it affects a person’s ability to carry out normal everyday tasks.

Not surprisingly, the 10 most common symptoms associated with the disorder stem from a root cause of anxiety. In an effort to relieve feelings of anxiety, persons afflicted by OCD may carry out repetitive behaviors, but experience little if any relief in the process. The condition seems to perpetuate itself by keeping a person embroiled inside an anxiety-producing mindset. Even in cases where a person knows a particular thought or behavior is irrational, he or she is unable to break free.

According to the U.S. National Library of Medicine, most people affected by obsessive-compulsive disorder begin to experience symptoms by the age of 30. The cause of the condition remains unknown, though genetics appears to have some influence on whether a person will develop the disorder. Other suspected causes include head injuries, infections and abnormal activity in certain areas of the brain.

So without further adieu, here are the 10 most common symptoms of obsessive-compulsive disorder. The first two listed actually function as core symptoms that underlie and fuel OCD disorders. 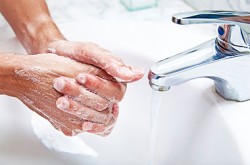 Obsessive compulsive disorder can leave you with uncontrollable behaviors.