There are several types of childhood anxiety disorders that affect millions of children throughout America. It is important for children to get some type of treatment for their disorders before they progress into something worse and ultimately impact a child’s future.

There are five main types of childhood anxiety disorders that are commonly diagnosed in children. These five disorders are as follows: 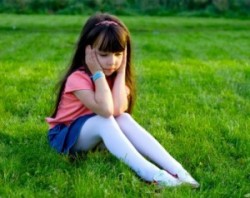 Childhood anxiety disorders can cause your child to have unwanted feelings.

Generalized Anxiety Disorder (GAD) is when a child uncontrollably worries about a multitude of different things. This worrying is unhealthy and causes anxiety, irritability and insomnia. GAD will come in spurts but it is uncontrollable to the child suffering from it and the worrying can be extremely intense and last for months at a time.

The majority of children experience some type of separation anxiety at a young age when they are first getting used to being separated from their parents, such as a child going to school. It is completely normal for a child to feel a bit of anxiety when they leave their parents for the first time at school, but the feelings should eventually subside once they become used to their new environment.

According to www.adaa.org, if a child is slightly older and unable to leave their family member, or takes longer to calm down after their family member leaves than other children; the problem could be separation anxiety disorder, which affects 4 percent of children. This disorder is most common in kids who are seven to nine years old.

Obsessive Compulsive Disorder (OCD) causes a child to experience persistent obsessions or compulsions that will interfere with their daily life. Basically what happens  with OCD is a child will have an unwanted thought or image that does not make sense but will occur whether the child wants to think about it or not. After the thought has entered a child’s mind they cannot get rid of it until they complete a repetitive action, which is the compulsion part of the disorder. A child with OCD will continue to have these irrational thoughts and behaviors that cause substantial anxiety. A child with OCD believes that if they do not do the action that they feel is needed to suppress their obsession something bad will happen.

Social Anxiety Disorder (SAD) is typically seen with children in school. SAD causes a child to be fearful of social situations, such as being called on in school, being the center of attention at an event, or even simply starting a conversation with another person. SAD can significantly impact a child’s school performance in a negative manner.

It is important for any child suffering from anxiety to get help in order to get rid or reduce the symptoms of the anxiety disorder so that they can have a normal and happy childhood.