Should Comorbid Disorders Be Treated Together?

According to the National Institute on Drug Abuse, “The term ‘comorbidity’ describes two or more disorders or illnesses occurring in the same person,” either at the same time or one after the other. The term also implies that the two disorders are interacting with one another, likely worsening each other. Therefore, comorbid disorders, especially addiction and other mental disorders, should absolutely be treated together.

The Prevalence of Addiction and Comorbidity

In truth, individuals struggling with addiction are extremely likely to also have another, comorbid disorder, such as a mood disorder like depression or PTSD or another type of mental illness like schizophrenia. “Compared with the general population, people addicted to drugs are roughly twice as likely to suffer from mood and anxiety disorders, with the reverse also true.”

The prevalence of these conditions co-occurring and interacting with one another causes patients to require treatment specifically tailored to their needs and to the treatment of both conditions. This is because allowing one to go untreated will assuredly endanger the individual.

The Need for Inclusive Treatment 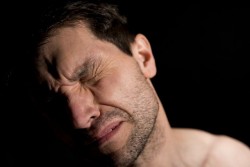 People with PTSD or any other severe mental health disorder are more likely to self-medicate with substances.

If an addicted individual receives traditional treatment that only focuses on their drug abuse, instead of on their mood disorder or mental illness as well, the individual will be extremely likely to relapse as a result. This is because many individuals with mental disorders tend to try and self-medicate with drugs, which is dangerous and often leads to addiction. If the original reasons why the individual started abusing drugs in the first place are not addressed, they are likely to merely return to the same behavior afterward, endangering them further.

In addition, “drug abuse may bring about symptoms of another mental illness” in those who did not struggle with one before they became addicted. If they are not treated for this mental illness, as well as for the addiction itself, their treatment program is not fully formed and the individual will be more likely to relapse or experience further issues from their former drug abuse in the future.

Because so many individuals with comorbid disorders are also addicts, the commonality of this issue must be taken into account and treatment that does so must always be available. Behavioral therapies have been found to be particularly effective for the treatment of both mental disorders and addictions, and these methods can be tailored to the needs of the specific individual to ensure the best effects possible. In addition, many medications exist that are safe treatments for addiction to opioids, nicotine, and alcohol while others can be used simultaneously to treat mental disorders, under a doctor’s care of course.

When a person has two disorders presenting at once, both must be treated safely and effectively at the same time or both will likely become more severe over time. If you have more questions about comorbidity or if you’d like to find a treatment center near you, call 800-598-5053 (Who Answers?)

What are the Best Ways to Treat Comorbid Disorders?