As if the opiate addiction epidemic sweeping the country wasn’t bad enough, deadly medications not even intended for humans have added to the crisis in a big way. Carfentanyl, a powerful medication commonly used to tranquilize elephants and large animals in general, has now become a co-ingredient with heroin batches being sold on the streets.

With heroin abuse rates steadily climbing, people who end up turning to heroin may well find themselves in the cross-hairs of Carfentanyl’s deadly effects. Considering how addiction works to drive users towards stronger and stronger drugs, today’s opiate epidemic may well take a terrible turn in the coming years, with scores of people literally dying for their next “fix.”

If you’re in need of treatment help, please don’t hesitate to call our toll-free helpline at .

Opiate overdose fatalities develop out of how these drug’s gradually take over the brain’s regulatory functions. Whether a drug contains small amounts of opiates or large amounts, the potential for abuse, addiction and potential overdose remains. 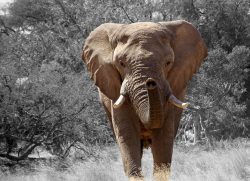 Since Carfentanyl is strong enough to sedate an elephant, it almost always leads to overdose in humans.

Some of the most commonly abused opiates include:

According to the Drug Enforcement Administration, in 2014, an estimated 79 people died each day from opiate overdose. In effect, every opiate overdose fatality marks the tragic end of a cycle of drug dependence and addiction.

Carfentanyl derives from fentanyl, one of the most powerful prescription opiates on the market. Carfentanyl produces fast-acting effects that take hold within minutes.

This drug has a potency level that’s 10,000 times more powerful than morphine and 40 to 50 times stronger than street-level heroin. Fentanyl in amounts as small as two milligrams can cause death. It only takes minuscule amounts of Carfentanyl to bring on the same effects.

Considering Carfentanyl’s intended use works as an elephant tranquilizer, the likelihood of overdose is all but a guarantee.

Whether a person starts out using codeine or oxycodone, opiate effects fuel a vicious cycle of dependence that drives a person to seek out stronger forms of the drug. This cycle accounts for why heroin overdose rates have spiked over the past decade.

According to the Centers for Disease Control & Prevention, heroin overdose rates nearly quadrupled between the years 2002 and 2013. With Carfentanyl’s advent as a heroin co-ingredient, overdose rates have just now started to reflect this new trend.

In effect, prescription opiate users transition over to heroin in search of a more intense “high” effect. This, combined with the drastic price difference between heroin and prescription opiates opens up a floodgate of new heroin users and potential Carfentanyl victims.

Opiate addiction dangers are not to be taken lightly. These drugs have the ability to take over brain and body functions within a fairly short period of time.

Opiates disrupt the mind in such a way that drug-using behaviors keep increasing in spite of any negative consequences that result. This means opiate addiction can take hold without a person’s even knowing it.

The added risk of encountering Carfentanyl along the way is yet another opiate addiction danger to consider.

If you’re struggling with opiate addiction and need help finding a treatment program, we can help. Call our helpline at to speak with one of our addiction specialists.