How to Spot Early Signs of an Alcohol Abuse Disorder

Alcohol has, for the most part, become a mainstay of American culture, for use during celebratory occasions and sporting events as well as a part of mealtimes in some households. Within many social settings, drinking is an expected form of recreation. These scenarios can pose a considerable risk for someone who’s susceptible to alcohol abuse and addiction.

During the early stages of alcohol abuse, a few mild symptoms can easily go unnoticed as alcohol tends to have a cumulative effect on brain and body functions. Ideally, it’s best to catch a growing problem early on since the longer a person waits the harder it is take action. Ultimately, being able to spot signs of alcohol abuse early on can save you a lot a pain and frustration down the road.

According to University of Maryland Medical Center, an estimated 17 million Americans struggle with alcohol abuse problems, while over 70 million deal with alcoholism in their families. Alcohol ranks first as the most commonly abused addictive substance and is one of the four most common causes of death in the United States.

Alcohol acts as a depressant, slowing the brain’s electrical activity as well as most every major system regulated by the body’s central nervous system. The brain also develops an ongoing tolerance for alcohol’s effects, meaning increasingly larger amounts are needed to produce its desired effects. 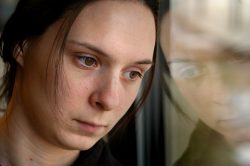 Bouts of emotional distress are an indicator of an alcohol abuse disorder.

Over time, alcohol starts to eat away at the brain’s cell structures, particularly the cells that produce essential neurotransmitter chemicals, such as glutamate and GABA. Changes in glutamate and GABA levels account for fluctuations in electrical activity as well as slower cell activity overall. Before long, rampant chemical imbalances start to develop in the brain. These conditions lay the foundation for alcohol abuse practices to take hold.

Signs of an Alcohol Abuse Disorder

Signs of alcohol abuse develop gradually over time, impairing the brain’s ability to regulate the body’s processes at the start. With continued drinking, chemical imbalances start to interfere with major brain centers, such as cognition, learning and emotions.

According to the National Institute of Alcohol Abuse & Alcoholism, signs of alcohol abuse to watch out for include:

While not everyone who drinks will develop an alcohol abuse disorder, certain risk factors tend to make certain people more susceptible than others. Risk factors commonly associated with alcohol abuse include:

If you suspect you or someone you know may be struggling with an alcohol abuse disorder and need help finding a treatment program that meets your needs, please don’t hesitate to call our toll-free helpline at 800-598-5053 (Who Answers?) to speak with one of our addictions specialists.