According to the National Institute on Alcohol Abuse and Alcoholism, 16.6 million adults ages 18 and older had an alcohol use disorder in 2013. Drinking alcohol increases the risk of cancers of the mouth, esophagus, pharynx, larynx, liver, and breast. But, the brain is also heavily effected by alcohol use.

To understand the abuse of alcohol in the US, it is important to understand the role that it plays in the human brain’s reward cycle. If your brain is trapped in an alcoholic reward cycle and you need help stopping, call Disorders.org at  and get the help you deserve. Call today!

Human beings seek out monetary rewards, sexual encounters, delicious foods, and professional accolades. We like them all because we like pleasure. Our brains process all of them in the same way: they release dopamine. Dopamine is a neurotransmitter: brain chemicals that communicate information throughout our brain and body. It is released into the nucleus accumbens: a cluster of nerve cells lying underneath the cerebral cortex (the brains outer layer, responsible for “higher-order” functions like language and information processing). Neuroscientists refer to this area as the brain’s “pleasure center.”

The abuse of alcohol causes a powerful surge of dopamine in the nucleus accumbens. Alcohol creates a fast track to the brain’s pleasure center.

Because of this process, the body becomes conditioned to feel pleasure when alcohol is introduced. 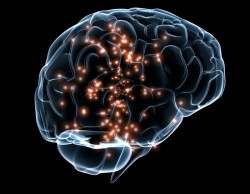 The pleasure experienced by consuming alcohol can eventually lead to the compulsive abuse of it.

Early theories were based on the idea that pleasure kept people seeking out and abusing alcohol. However, more recently it has been discovered that the situation is more complicated than that. Not only does dopamine have a role in creating pleasure, it also plays a role in learning and memory. These activities move the use from a mere liking to an addiction.

Dopamine interacts with glutamate, another neurotransmitter. The pair take over the brain’s system of pleasure driven learning. This relationship links activity needed for survival with the motivation needed to repeat them again and again. People keep having sex, eating … and using alcohol.

The next step in the process motivates people to move beyond finding pleasure in something and on to actively seeking that pleasure source out. After repeated experiences with alcohol, users’ nerve cells in the nucleus accumbens and the prefrontal cortex link liking something and wanting it.

Unfortunately, overtime an addict is left with memories of what alcohol used to do for them and they become forced to achieve that sensation once again. They become compulsive in their substance use.

Remember the learning process—hippocampus and amygdala—mentioned earlier? The brain has already stored information about where alcohol can be located, where it has been used, and who provides it. These memories kick in the conditioned response—the intense craving for the opiates—whenever these cues are encountered.

Because of these cravings, users become addicted and the cravings also cause former users to relapse. Because of the brain’s programming, even after periods without use, an environmental factor can trigger craving. Conditioned learning is a vital component in the relationship between opiates and dopamine.

The Science of Addiction

Worryingly, a scientific article, “Alcohol and Dopamine” reports unlike other pleasurable stimuli, alcohol-related stimuli maintain are motivational (create the need to drink more) even after repeated alcohol use). It is believed this contributes to the craving for alcohol observed in alcoholics.

If you fear that your alcohol use has you trapped in a compulsion you can no longer control, it is time to get help. Your brain will fight you, but Disorders.org can help. Call us at  and get the support you deserve. Don’t wait.